As more states legalize cannabis, all signs continue pointing to an indisputable megatrend…

The Legal Cannabis Bandwagon Is Getting Bigger

On March 31, New York fully legalized cannabis use for state residents 21 and over, effective immediately.

It’s something we’ve been predicting for months. Faced with the threat of losing tax revenue to neighboring states that permitted the sale of cannabis products, the Empire State would have no choice but to give in.

And with legalization on the books, New York projects $350 million in additional tax revenue along with up to 60,000 new jobs.

This “domino effect” we’ve been writing about for months is playing out all across the country. Just last week, New Mexico’s governor signed a bill to legalize recreational cannabis.

Similar to how New Jersey’s legalization forced New York’s hand, for New Mexico, it was Arizona.

With experts projecting gains as high as 1,530% by the end of this year…

If you don’t buy this ticker, you’ll regret it later.

Forbes has already confirmed that when all is said and done, “a new class of millionaires may emerge.”

Click here and get the ticker now… no strings attached

Even Virginia legalized use on April 7. This signals a shift in what many consider to be the more conservative South.

At this point, since the November general elections, seven more states have voted to legalize recreational marijuana – and the pace is quickening.

It’s not hard to see why…

2020 was a banner year for cannabis sales, with sales skyrocketing 46% year over year to $17.5 billion. And market research firm Grand View Research forecasts the market will be worth $84 billion by 2028.

On top of that, Congress is starting to act, too.

On Monday, the U.S. House of Representatives passed the SAFE Banking Act. The bill prohibits federal banking regulators from punishing financial institutions that choose to work with legal cannabis businesses.

It stills need to approval by the U.S. Senate… but with Democrats controlling both chambers, that prospect seems more likely than ever.

Regardless of what happens on the federal level, state politicians won’t want to miss out on a cut of that revenue. Next up, we see Pennsylvania and Maryland caving into the domino effect… and joining the legal cannabis bandwagon.

In today’s Palm Beach Daily, I’ll tell you what’s going on in the cannabis space… and how you can position yourself to ride it higher…

In states that have legalized recreational and medical cannabis, we’re seeing record-shattering sales.

For example, Colorado reported over $2 billion in sales for 2020. That was even amid sweeping COVID-19 lockdowns and a 52% decrease in tourism spending.

Illinois also set a new monthly sales record of $109 million this March. The state is only entering its second year of legalization… but it’s already threatening to top high-revenue states like Washington and Oregon for total sales.

All signs continue pointing to an indisputable megatrend forming in cannabis.

Here at Palm Beach Research Group, that’s what we focus on. We position ourselves early in undeniable trends… then we let time do the heavy lifting. And cannabis was one of the first major trends we introduced to our you in the last few years.

We believed it was perfectly poised to see a surge and potentially deliver incredible gains for investors… And even though cannabis-related companies have seen volatility since then, the overall trend is still up.

Indeed, since the initial stages of cannabis legalization in 2012, sales never stopped climbing…

You can see this at work in the chart below. 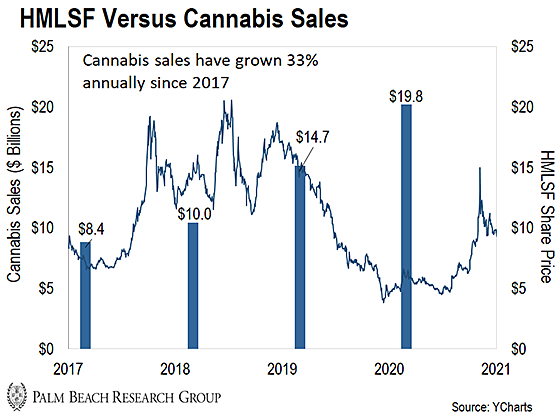 At the same time, market sentiment is still negative as reflected by much lower share prices… This setup is giving us a great buying opportunity.

Eventually, market sentiment will catch up to the fundamentals of growing sales. And once the market awakens, we’ll see share prices across the industry start to take off – like they’re doing now…

If You Have More Than $3,000 in Your Brokerage Account, Watch This 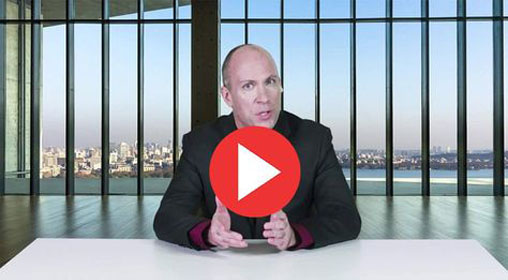 Major problems could be in store for investors…

Cashing in on the Green Wave

All the signs are pointing to another bull market in cannabis. Companies like Hexo Corp, Organigram, and Aphria are up about 32%, 65%, and 84% year to date.

And remember, Grand View Research expects the global legal cannabis market to expand at an annual growth rate of 14.3% from 2021 to 2028, to a total market value of about $84 billion.

If you’re looking for broad exposure to the legal cannabis sector, consider the Horizons Marijuana Life Sciences ETF (HMLSF). It holds a basket of some of the best names in the space.

Since the green wave on Election Day, the ETF has shot up about 74%… with more gains likely to come.

Always remember… do your homework before making any investment. And never bet more than you can afford to lose.